The Housing Market Is On Fire, Is It 2007 All Over Again?

One of the shining spots in the US economy right now is the housing market. Between seeing it firsthand in my own neighborhood and hearing the experiences of clients buying and selling homes, the housing market appears to be as hot as it was in 2006-2007. “For Sale” signs are popping up one week, and “Sale Pending” signs are there just a week later. Existing home sales have risen for the last 5 straight months, with the October results coming in at an annually seasonally adjusted rate of 6.85 million home sales. To think this all occurring with a staggering number of Americans unemployed or underemployed is just amazing.

But is it too good to be true? Have we already forgotten what happened in 2007 when the housing bubble popped?

Below is a chart of existing home sales over the last 20 plus years. As you can clearly see, the total sales have started to reach a level not seen since the Great Financial Crisis. Any comparison to that period should make people pause and see if there’s a need for concern. 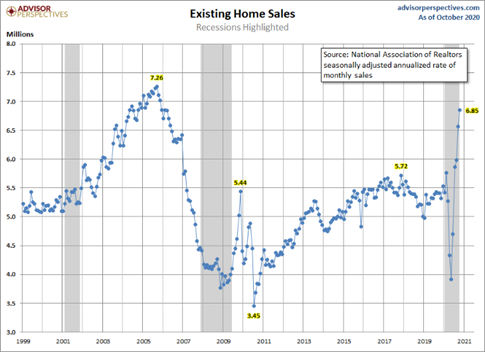 Record low mortgage rates have helped fuel the demand for homes. It is crazy to think that just 15 years ago the average mortgage rate was over 6%. Below is a chart of average 30-year mortgage rates going back to 1971: Back in 2007, there were a lot of stories of anyone and everyone getting a mortgage, even when it was obvious the person would not be able to pay it back. Long gone are the days of NINJA loans (less you have forgotten, these were mortgages where the home buyer had No Income, No Job and No Assets).

Looking at the 20-year chart below we can see where the dip in FICO score quality for mortgages in 2007 was a foreshadowing at the growing issue. However, as the title implies, that is not the case today. In fact, banks are so concerned about their own balance sheet that they appear to be lending to those with higher and higher FICO scores. This is one big reason why the strong housing market of today is not a repeat of 2007. Besides the jump in sales, we have also seen the median home value sold in the US creep to over $300k for the first time in our country’s history. Record low mortgage rates can help buyers purchase a more expensive house, but the reality is there just are not enough homes for sale. Economics 101 says that when demand outstrips supply, the price will rise. Look below at the US Existing Home Months’ Supply, we are at the lowest levels in 20 plus years: With record low supply for existing homes, it should come as no surprise that homebuilders’ confidence is off the charts: Below is a chart of housing starts over the last 25 years. Once construction begins on a foundation, or footing, construction of the new home is counted in this economic data point “housing starts.” As you can clearly see, the recovery continues but even with the record high confidence level in home builders, we have a long way to go before we reach pre-Great Financial Crisis levels. The CEO of Toll Brothers, one of the largest builders in the US, was quoted last week saying “We are currently experiencing the strongest housing market I have seen in my 30 years at Toll Brothers.”

Part of the reason that starts have not fully recovered is that builders are struggling to find skilled workers, and COVID has also impacted the supply chain of many items needed to build a new house. Builders aren’t going to break ground if they know they cannot get the necessary supplies. Even if the economy only continues to trudge along, if rates remain low, we fully expect this trend of strong housing data to continue because the demographics of the US are changing rapidly.

A Trend that will continue for a long time?

For years those in the housing industry were patiently awaiting the arrival of the Millennial generation into the housing market. The Millennials are currently the largest generation in the US, having passed the Baby Boomers. My own generation, Generation X, is smaller than both the Boomers and the Millennials. Their arrival has been delayed by both financial challenges (2008 crisis) and secular shifts in attitude towards marriage and children.

The chart below shows that the median age of men and women’s first marriage in the US has been climbing 60 plus years: We also see that the mean age of first-time mothers has been growing for decades: Knowing that Americans are getting married later and having children later, it’s not shocking that it took some time for the Millennials to start buying homes. My wife and I did not buy our first house until after we were married, and I suspect that is fairly typical.

We saw in June that the Millennials accounted for 56% of all home purchases in the US. If the demographics are to be believed, this trend could continue for many more years. Looking at the chart below, the peak of the yellow area is now hitting the magical age of 28. This wave is just starting to crest!

Auguste Comte, a French philosopher, is known for saying “demography is destiny.” With that in mind, the strong housing market in the United States should not come as a surprise. Fueled by record low rates, a record low supply of homes for sale, and the demographic wave of Americans hitting their prime home purchasing age, we believe this trend has just started and will continue for a few more years. Unlike the strong housing market felt before the 2008 crisis, which was built on cheap credit, this housing crisis is being driven by the economics and demographics.

The information contained in this post is not intended as investment, tax or legal advice. StrategicPoint Investment Advisors assumes no responsibility for any action or inaction resulting from the contents herein. Derek’s opinions and comments expressed on this site are his own and may not accurately reflect those of the firm. Third party content does not reflect the view of the firm and is not reviewed for completeness or accuracy. It is provided for ease of reference.

Rate Hikes and Mid-Terms on the Horizon, what do they mean for stock returns?
9 Things to Consider the First Year You Have to Take Your Required Minimum Distribution
Derek Amey on “State of the State” with Richard August: “Where Have All The Workers Gone?”